RAST, SEED and Kbase are interrelated bioinformatics tools that have backend servers providing command line interfaces to all the functionality provided on their respective web sites. Using these command line tools, one can directly upload or download data, create custom analyses, initiate long-running jobs, create their own user interfaces, run batch operations, and more. Normally, one would have to download client software to access these servers from a local machine. With IRIS, we have eliminated that step.The IRIS  interface is a web-based tool that allows one to run command line scripts accessing these Kbase, RAST and SEED command servers and some useful UNIX tools, without downloading any software. The interface keeps track of who you are and stores your results and history on our KBase IRIS server. The version of the IRIS interface we are describing is located here. The initial page looks like this: 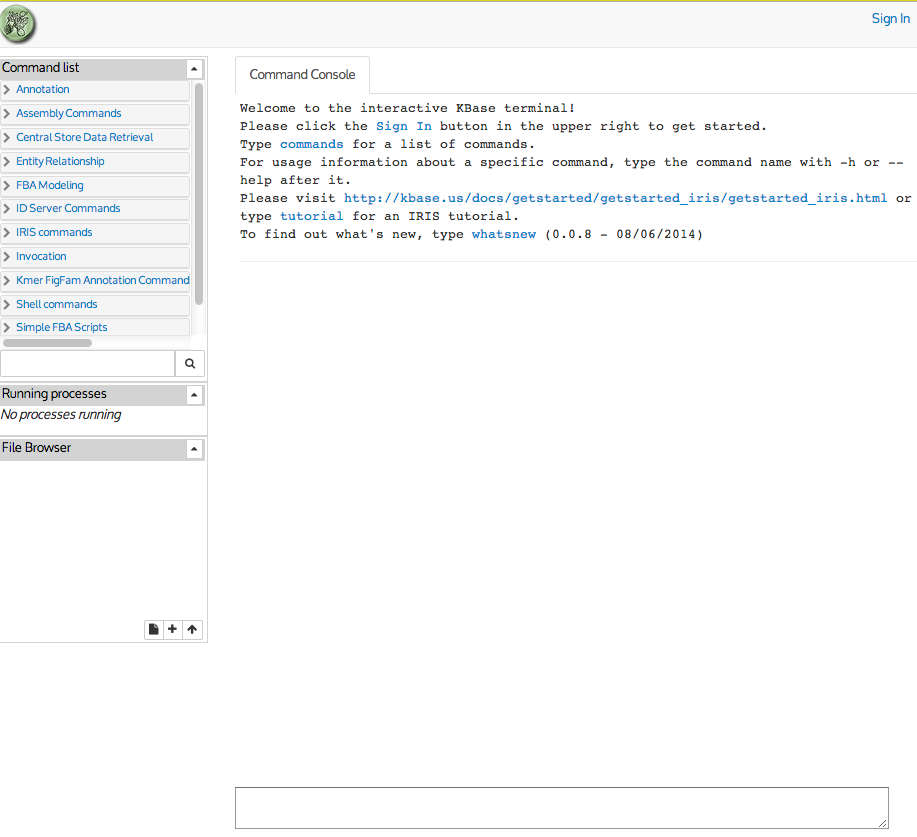 
Notice that commands are entered in the window at the bottom of the screen in the "COmmand Entry Box"and results are scrolled above it.

To get started, we think of most of the KBase command-line tools as taking in a file containing a tab-separated table and outputting a modified table. The most common modification is the addition of one of more columns. We create "pipelines" of these tools to implement fairly complex transformations leading to the final table containing the desired output. For example, consider the following little pipeline:

The all_entities_Genome command is thought of as producing a table in which the first column (by default) is the genome ID, and any extra columns come from the arguments of the command. In this case, we get a 2-column table:

This 2-column table is fed into a UNIX command called grep, which keeps lines that match its argument. In this case, the grep extracts rows in the table that match the string "Streptococcus pneumoniae". Thus, we get as a result a 2-column table in which each row contains "Streptococcus pneumoniae". During the writing of this tutorial, the output was:

Scrolling down, we see the return list has been truncated to 100 lines. This is standard in Iris, to avoid overwhelming the display area with output.

This shows the basic notion of transforming tables, extracting rows that contain a given string (or, more generally, a pattern), extracting columns from a table, or sorting the rows in a table is the basic style we advocate. For example, suppose that you wanted to find all features of Streptococcus pneumoniae that had been assigned a specific function (say, triosephosphate isomerase). You might try using

Here, some extra comments need to be made:


We now leave it to the reader to complete the exercises in Some Basic Exercises Using the DOE KBase and Getting What You Need from the CS Using Command-Line Scripts.


IRIS maintains a file system for your use. You can upload your own data files (using the file browser upload button in the file browser interface in the lower left), or create your own via output redirection using the > redirection symbol. Let's say you wanted to create a file of Streptococcus genomes; you would type

This creates a file with the name all_strep in your IRIS user space. You can see your file system by using the ls command and in the file browser interface. 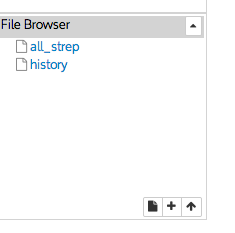 You can view individual files by clicking on them. The file will open in a new window.


To upload a file you have prepared on your own computer, just click on the  "Upload a file" icon in the file browser.
This will bring up a file browser you will use to select a file for upload.


Select your file and click the choose button; your file will be uploaded into your IRIS file space.

In IRIS, you can use the following commands which are simply run in a UNIX shell on the server and use the full semantics of the UNIX commands:

File system commands are also available, but are re-implemented on the server as very limited version of the originals.